New wave icon singer Howard Jones who first burst upon the contemporary music scene in 1983 with his English songwriting and pioneering synthesizers is currently on a summer tour promoting a brand new album.

Howard Jones first new studio album in nearly a decade is called “Transform” and it is out now for listeners.

WTSN’s Mike Pomp had a chance to speak with Howard Jones about his music, his songwriting and his current summer tour. Howard Jones has sold over 8 million albums worldwide and continues to make new music and tour the world. 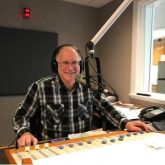