For the first time in the series history, it’s raining while I walk to work holding the phone and an umbrella. Only took eight months!

For the first time in the series history, it’s raining while I walk to work holding the phone and an umbrella. Only took eight months!

The MLB postseason is set in the AL. The NL? Not yet. Do the Colorado Rockies enter October hot as a division or wild card leader? Or will the reigning, defending, undisputed NL Champ LA Dodgers win the West? Can the slumping St. Louis Cardinals grab the second and last Wild Card?

The 2018-2019 NHL Season opens on Wednesday, October 3rd. A four-game slate including the Bruins at the Stanley Cup Capitals. Other games that night are Canadiens at Maple Leafs, Flames at Canucks and Ducks at Sharks. San Jose also hosts the 2019 NHL All-Star Game in January.

Come on by, I’ll be there all day, as will some personalities from Binnie Media! Enjoy the weekend! 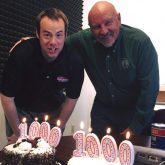 Need to Get Back On Track with Your NFL Picks? Call in the Ringer – Psychic Sue!